“The Pure Devil”: Excerpts of Grief and Remembrances from Victims’ Families During the Sentencing of Jeffrey Dahmer

Lost in the glamorization of serial killer Jeffrey Dahmer are the lives he took. His apartment building in the Avenues West neighborhood is gone, the chocolate factory he worked at in the Valley, too, as are many of the nightclubs and bars he haunted. 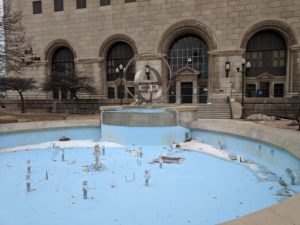 A February 2019 view outside the Milwaukee County Courthouse.

The court transcripts remain. Milwaukee County Court clerks keep the boxes of the Dahmer files nearby; most old files are sent off for storage, but the Dahmer case receives regular requests for review and copies. Parts of those transcripts are presented below on the 27-year anniversary, meant to reflect a sliver of the lasting, actual damage Dahmer left on 17 people, the majority of them from Milwaukee. The following are excerpts from the sentencing transcripts as typed by Milwaukee County Court, branch 26 court reporter Nancy M. Dosemagen.

THE COURT: Go ahead, sir. Sir, you’ve handed the bailiff a written statement and you’re going to read from the statement; is that correct?

THE COURT: Go ahead.

SMITH: Our parents, Walter and Josephine Smith, were two hard-working Americans who raised thirteen children. Of the survivors, I have been selected to express a statement of each one’s personal pain. …

Carolyn Ann – Jeffrey Dahmer took away my best friend, my better half, my roommate. He took away the laughter. His biggest dream was to be a model and I hope that one day I can fulfill his dream of being a queen-sized model and keep people laughing as much as he did.

Robert Ester – I miss you, Edward, and I love you and maybe now you can finally be at rest.

Josephine Helen, our mother – This is a terrible tragedy to my family, but I still have twelve children to live for and in them hopefully I will overcome it. Let me tell you briefly about Edward Warren Smith on a more personal level. Edward was raised in a Christian home in Brookfield, where he learned how to be a loving, trusting, respectful human being. Eddie inherited all the blessings that a family structure had to offer. The greatest of these blessings was love. Eddie’s style of life and dress was uniquely flamboyant. He was intelligent, witty, compassionate toward the human race. At the time Eddie’s life was taken from him, he was searching for his place amongst you and me …

When all the facts are known, we have that society will have gained some knowledge that will help prevent a tragedy such as the one Eddie suffered. There was no sacrifice too large or too small for Eddie. He truly loved giving and gave of himself abundantly.

THE COURT: Sir, would you likewise identify yourself for the record.

MILLER: Good morning. My name is Stanley Miller. I’m the uncle of Ernest Miller and I’ve been given this opportunity to come before you on behalf of the Miller family …

Jeffrey Dahmer, through your selfish actions, you have caused my family to suffer the loss of society and companionship of Ernest. This was done without any cause or provocation on the part of Ernest. Despite the fact that you had the knives, the saws, the bats, the acid, the drills and possibly a gun, even while he was in a semi-conscious state of mind, you didn’t give him the chance to fight for his life. You took his life like a thief in the night by cutting his throat. Rather than facing him and letting him fight for the thing that he felt most dear, you took the coward [sic] way out. Did you ever stop to think that this was someone’s son? Did you ever stop to think that this is someone’s brother, nephew, uncle, cousin, grandson or just someone’s friend that’s missing him dearly?

Jeffrey Dahmer, just a couple of things about Ernest that you didn’t take the time to find out. First, Ernest was a dancer. This came naturally and this was his dream … all through his short-lived life.

Second, he had a family that loved him. He has a niece now that’s four months old that he’ll never get to hold or play or just watch grow up. He’ll have to look from the heavens now. I hope that you live a long life so that one day you can appreciate life. On that day, you would know my family’s suffering.

HUGHES: My name is Shirley Hughes and I’m Tony Anthony Hughes’ mother. First of all, thank God and – to give thanks to the Judge and to Mr. McCann for the verdict that came in.

I would like to say to Jeffrey Dahmer that he don’t know the pain, the hurt, the loss and the mental state that he put our family in, but I would just like to read a poem that a good friend of my son wrote …

[in part] – Mom, I’m gone, My hope, my breath, my want to live have been taken away from me unwillingly and emotionally. I know that there’s a dragon piercing your heart day and night because of this, but yet I’m not far away. When you get cold, I wrap my arms around you to warm you. If you get sad, I softly grab your heart and cheer you up. If you smile I’ll smile right along with you and when you’re happy, I’ll be – I’ll become – I’ll know it because you’re thinking that two fingers and one thumb means I love you in sign language. My son was deaf. When you cry, take one tear drop and place it outside your window ledge and when I pass by, I’ll exchange it for one of mine. Two fingers and one thumb, mom.

HAGEN: I’m Janie Hagen, sister of Richard Guerrero, and I’m here as the spokesperson for my family …

On March 24th, 1988, Richard disappeared at the age [of] twenty-one and I also want to state that my family did everything in our power in finding our beloved Richard Guerrero. He was a young man full of life and energy with the ambition to make others happy. As a loving person, he would always take the needs of others before his own. 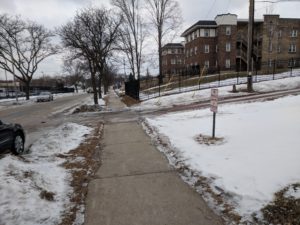 The apartment building where Dahmer lived on North 25th Street in the Avenues West neighborhood was torn down not long after his murders were revealed.

So, Jeffrey, when you killed my brother, Richard Guerrero, you also killed my father and my mother’s youngest future and my three brothers’ lives, including my life, my husband and my three children will never forget this tragedy that you inflicted upon us.

Therefore, I would like to end my speech by saying in my language that, Jeffrey, you are el diablo en puro diablo que tava cuelecto en la caye’s de nosotros. That means the devil, the pure devil, that walked our streets and was loose.

ISABEL: I don’t even need a microphone. My name is Rita Isabel –

ISABEL: My name is Rita Isabel and I’m the oldest sister of Errol Lindsey. Jeff – whatever your name is, Satan. I’m mad. This is how you act when you are out of control. I don’t want to ever see my mother have to go through this again. Never, Jeffrey. Jeffrey, I hate you, mother-fucker. I hate you. This is out of control. Don’t fuck with me, Jeffrey. I’ll kill you, goddamn it. Jeffrey, look at me, mother-fucker, I’ll kill you –

THE COURT: Court’s in recess.

(Note: this piece is an outtake from “The Milwaukee Anthology,” the nonfiction/poety/artifacts collections that I edited and arranged, out April 2019 from Belt Publishing.)

Justin Kern pays the annual bill to own this domain that contains his name. What you see here is a sampling of how he chooses to use that online space. He lives in Milwaukee and still plays Sega Genesis.
View all posts by Justin →
This entry was posted in They Don't Call It The Olds and tagged history, Jeffrey Dahmer, Milwaukee, true crime, victims families. Bookmark the permalink.