Jaromir Jagr, My Aunt & Every Beer on the Last Flights Out of Buffalo 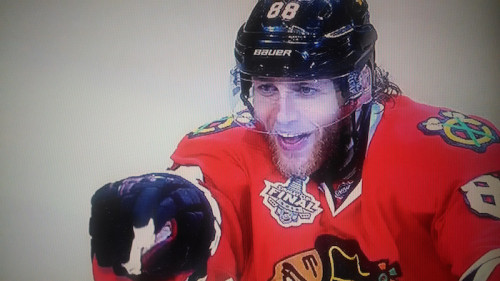 Western New York is secretly part of Canada. Canadians would never agree to this deal, unless they needed you to sneak them a news report on a notorious trial. State and national allegiances aside, “Upstate” cities like Buffalo and my hometown of Dunkirk are a sixer of Labatt Blues closer to southern Ontario than they are to Albany, Brooklyn or Manhattan.

With proximity to Canada comes closeness to hockey, the country’s most celebrated sport (sorry, Cheryl Bernard). Hockey players, then, become giants. Pat LaFontaine essentially stopped a couple of Division Z college hockey games by popping in to visit a friend for a period. As a pre-teen boy in the early ’90s in Buffalo, it was immediately apparent that the the two-dozen behemoths obscured in dress clothes and sat behind a bottler’s supply of empty beers at the airport were the 1992 Pittsburgh Penguins.

I was at the airport with my mom to drop off my aunt Kyle, the cool, youngest aunt who put Flipper on mixtapes and wore black leather. Back when you could walk friends and family all the way to the airport gate, we escorted Kyle to her Christmastime flight back to New York City. Situated near her delayed flight was a bar where the 1992 Pittsburgh Penguins were moonlighting as players of a new sport where the goal appeared to be replacing all of your bodily fluids with beer as quickly as possible. Despite this newfound athleticism, it was their place as hockey stars which reduced me to a slack-jawed state. My aunt, in tousled hair, tall boots and a watch with Madonna’s face on it, marched me to the Penguins for autographs that would cement a brush with hockey fame. Kyle made a joke to my mom about the jocks thinking she was propositioning them, or some joking language around prostitution I understood from my mother’s regular viewings of “Pretty Woman.” My aunt is a creative, funny force who really digs Siouxsie Sioux (and, more recently, tasty food). What she is not, is a prostitute. In black leather and probably ripped tights, who knows what the fumbling Penguins P.R. wrangler thought as she bypassed him with a young boy in tow to ask for the team’s sloppy autographs. In our quick walk across the terminal, I had no concern for the sexual interests of Tom Barasso or the social expectations of my aunt (who, for the record, is unequivocally not a prostitute). I was in a minute daydream over flickers of TV stars only surpassed by the annual visit to the Buffalo Bills training camp of that same era.

And to a 12-year-old with a rat-tail, two players stood out in particular because of their own stupid, stupid hairstyles. Kevin Stevens wore a professional-length, Seinfeld-styled mullet. Jaromir Jagr, on the other hand, had such a curly and celebrated version of the hairstyle that it would have been called “The Jagr” had some smart-ass teens or The Beastie Boys not first coined the dominant phrase. As the team* took the two scraps of ripped paper my mom found in her purse to nab the signatures, Stevens made an audible, heavy, bitchy breath as the papers reached him. Jagr, on the other hand, smiled and looked at me, like most of his teammates, happy from a win, many beers and a proposition from a lady of the night**. (It was night time and Kyle is a lady. Shit, that really came out wrong. Note to self: delete that line about the lady of the night.) My aunt has always been awesome, though this certainly boosted heretofore unattached emotions about Jaromir Jagr, whom I recall as a grinning mix of appreciation from the exchange.

I started writing this between the first and second periods of game six of the 2015 Stanley Cup finals. I’ve been cheering for the Chicago Blackhawks, partly as there is no team in my city of Milwaukee, but mostly from some indirect association with the Patrick Kane, the Hawks’ star winger and the pride of South Buffalo. Sour and sudden endings sprinkled throughout my Buffalo sports memory forced me to close the computer as the third period started, with time still to snap whatever jinx I had somehow surely started.

So I’m finishing this meandering remembrance a day later, with the Blackhawks victorious and the minor joy that Kane is not saddled with his home neighborhood’s sullen decades. Kane is a prestidigitator in control of hockey’s glorious calamity, not unlike Jagr in his crafty early years. Like Jagr, Kane sports his own mullet, the latter’s hairdo sweaty with nouveau-irony. To the occasional chagrin of the league, Kane drinks a lot of beer, like it seemed Jagr had 23 years ago at the Buffalo airport. When Kane flies back home to South Buffalo – whether with the Cup or drunk as hell or both or neither – I hope he remembers the rare, cool place he has on our planet. Especially if some young dork’s goth (and non-prostitute) aunt hits him up for an autograph.

*Aside #1: Mario Lemieux was there, too, in a bonkers year where he battled back cancer to both stay alive and win the scoring title. In the flurry of the exchange, Lemieux, the second-greatest scorer in my lifetime, might as well have been one of the non-related Samuelssons, Ulf and Kjell.

**Aside #2: Kyle exchanges caviar for money. That’s it. Don’t get any gross ideas, drunk Kevin Stevens.

Justin Kern pays the annual bill to own this domain that contains his name. What you see here is a sampling of how he chooses to use that online space. He lives in Milwaukee and still plays Sega Genesis.
View all posts by Justin →
This entry was posted in Sports & Physical Amusements and tagged aunt Kyle, autographs, Buffalo, Flipper, Jaromir Jagr, Labatt Blue, Patrick Kane, prostitution. Bookmark the permalink.